In 1808 a Burlington saddler named Moses Jewett built a two-story brick house on Court House Square (present-day City Hall Park) and the post road, across from his saddle shop.

Jewett’s house caught the eye of Vermont’s governor, Cornelius Van Ness, who bought it in 1824, added a third floor, and turned it into an inn.  He leased the inn to Royal H. Gould, who operated it as a general stage house, with a tavern, under the name American House.  In those days the stagecoach, pulled by six horses, would start out early each morning and return late at night.

In 1844 Van Ness, no longer governor, added an east wing to the hotel’s Main Street side (extending to present 135 Main) and a south wing on the St. Paul Street side.

In 1849 the Vermont Central Railroad, linking Burlington and Windsor, Vermont, was completed. 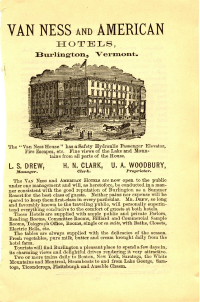 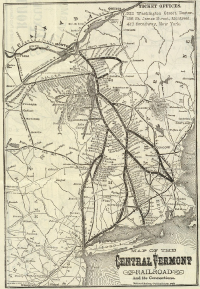 In 1852 a local farmer, Lemuel S. Drew, became proprietor of the American House. Produce from his nearby Lake View Farm—he raised cattle, sheep, swine, geese, ducks, and fowl—found its way onto the inn’s dining tables. In the early 1860s, when the railroad line was extended to Montreal, visitors began arriving regularly from Canada.

In those years American House was owned by Lawrence Barnes, an entrepreneur who shipped lumber by boat from his land in Trois Rivieres, Quebec, to Burlington.  Barnes hit upon the idea of dressing this lumber on the Burlington shorefront before transshipping it by rail to different points in New England, thereby saving 12.5 percent in freight expenses.  The idea turned Burlington into a leading wholesale lumber market.

But Barnes’s attention was not on hostelry, and the American House underwent “unfortunate vicissitudes.”  In 1868 Dr. B. J. Heineberg bought out Barnes’s interest, and Dr. O. C. Stacy bought out the share from Barnes’s co-owner, E. Foster Cooke of Rutland.

Dr. Heineberg took a warm personal interest in the hotel. In the next years, as new railroad lines opened up, increasing the demand for accommodations, Heineberg upgraded the kitchen and dining room and added a double veranda and a “ladies’ entrance” on St. Paul Street. He also installed four steam radiators—a modern contrivance.

By the 1870s, Burlington was served by several trains daily to Boston, New York, Saratoga, the White Mountains and Montreal, as well as by steamboats to and from Lake George, Saratoga, Ticonderoga, Plattsburgh, and Ausable Chasm.

Under Drew’s management, the American House was the largest and finest hotel in town. Conveniently located at the center of the city’s business district, it was a natural “rendezvous for politicians, leading merchants and good fellows,” as an 1871 news story reported, and the scene of brilliant social events. Guests included Presidents Monroe, Van Buren, and Pierce; Henry Clay; Vice President Andrew Johnson; and Generals Winfield Scott and John Wool.

On the ground floor were offices for the railroad, steamboat, and telegraph, as well as a commodious parlor; meeting rooms, public and private; and a dining room, with a floor of Georgia pine and black walnut. The walls were painted “a delicate salmon tint,” according to the hotel brochure, and the ceiling was ornamented with chandeliers and frescos. 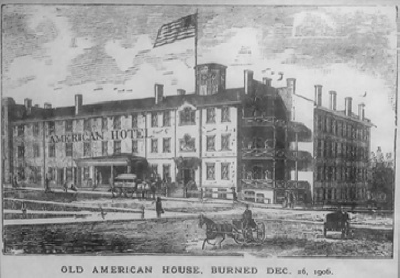 The hotel’s 150 rooms, which could be rented as singles and/or suites, were equipped with all that “the most fastidious would desire,” such as “Baths, Closets, Electric Bells, etc.” The hotel furnished “the best of horses and carriages with experienced drivers at all hours of the day and night.” The basement contained “a curious machine for extracting grease from the refuse water of the kitchen and laundry. This grease readily sells for $12 to $14 a barrel. It is the most economical contrivance of the period.”

Dr. Heineberg took “a good deal of pride in the old American,” the newspaper reported.  And each morning Proprietor Drew’s own Lake View Farm supplied the hotel dining room with “the delicacies of the season”: fresh vegetables, pure milk, butter, and cream from his Ayrshire stock.

In 1883 Drew retired for good, whereupon the American Hotel was “united in ownership” with the Van Ness House, across St. Paul Street.