In the 1920s the automobile became even more of a mass phenomenon, and American hotels entered a boom period. But Prohibition was now the law of the land—and that was a problem for innkeepers, since a large proportion of their receipts came from the sale of alcohol. Conveniently, the Hotel Vermont’s second-floor dining room had two bathrooms, with two bathtubs. During Prohibition, one was used for the usual purposes, while the other kept the liquor chilled.

During the 1930s Annie Baldwin gave ballroom dancing lessons in the Roof Garden—she taught the foxtrot and other steps to young Burlington residents.  George E. Little, Jr. (who would grow up to own a local printing business) was in one such class, along with Dudley Davis (a future Merchants Bank president) and Torrey Carpenter (a future state representative). “The boys were always embarrassed and stayed on one side of the room and giggled, while the girls sat on the other side and looked dignified,” Little recalled to a newspaper reporter. 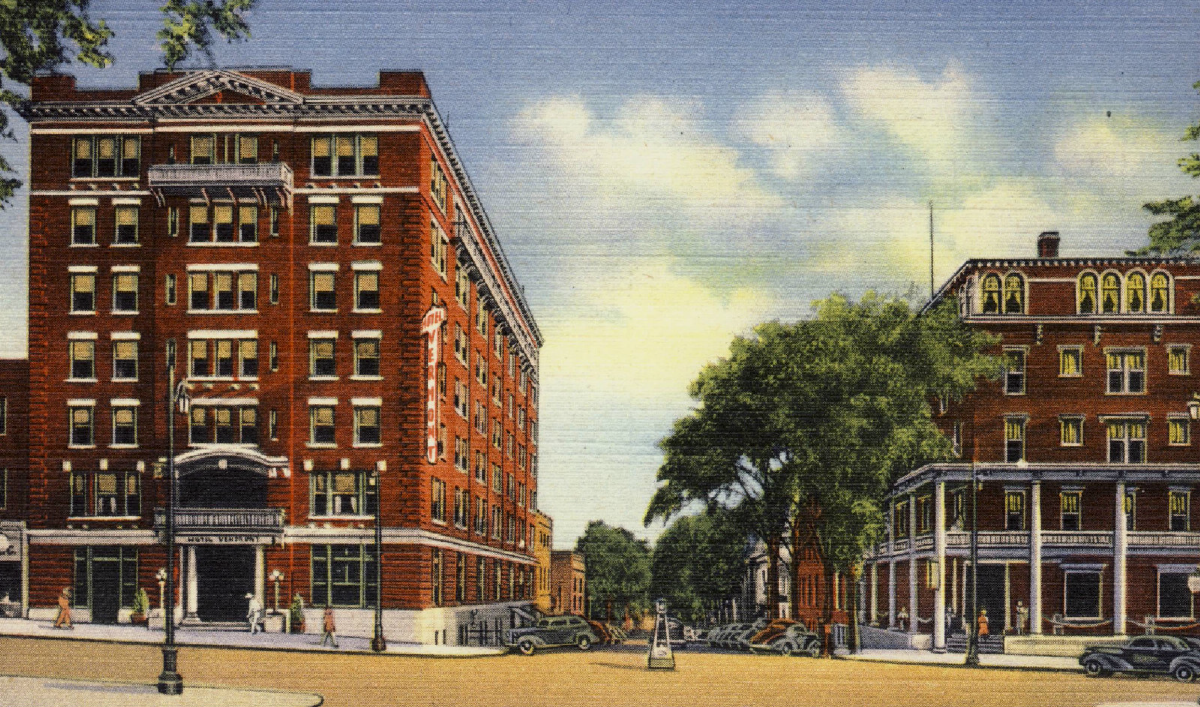 In August 1936 Powell sold the hotel to a prominent banker, Edward Clarkson, in a foreclosure sale.  Three months later Clarkson sold it to Edward P. Woodbury, manager of the Van Ness House (across St. Paul Street), and his partner. As owner and manager, Woodbury added a restaurant, the Sugar House Grille, around the corner on St. Paul Street (site of the present Trattoria Delia).

Photographs during the Second World War show the hotel looking prosperous. Stars of the arts stayed there because it was lodging near city concert halls, said Sarah A. Pappas, who operated the Park Cafe on Main Street. “It used to be the place in Burlington,” she said, recalling that opera and contemporary singers “stopped to eat at her cafe because they stayed in the adjoining hotel.” 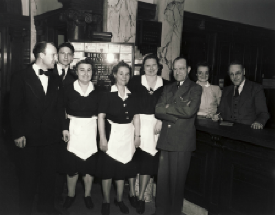 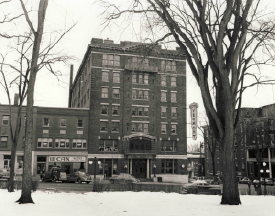 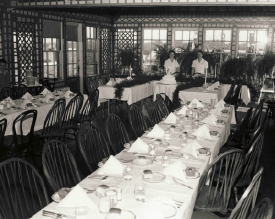 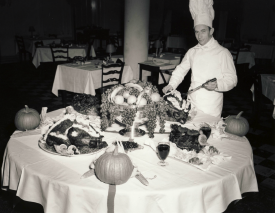 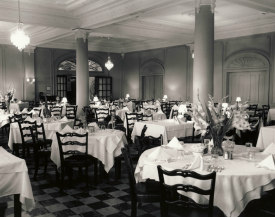 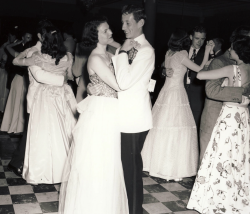 The hotel still hosted glorious social events. Niels Madsen, the hotel’s chef in 1946, specialized in carving frozen sculptures for the banquet tables.  He “cut ice directly from Lake Champlain,” reported the Burlington Free Press, and carved it into “donkeys and elephants for political gatherings, a likeness of the home office skyscraper for insurance company meetings, and a swan for a banquet attracting the general public. It set the hotel apart.” Madsen had an autographed photo of himself and his wife taken while they were standing with an illustrious visitor—boxing champion Jack Dempsey.

If the automobile had spurred the creation of the Hotel Vermont—and other American grand hotels–in the 1910s, starting in the 1950s the automobile contributed to their decline.  Motels were becoming more abundant, siphoning off the tourist clientele with their inexpensive rooms and easy parking. Then came the hotel chains—the first Holiday Inn appeared in 1952. Their economies of scale put individually owned hotels at a competitive disadvantage. Guests became scarcer. Tourists still came during the fall foliage season or when parents visited their children at nearby schools, but too often the rooms stood empty. Revenues declined.

In 1959 the hotel was sold (in another foreclosure sale) to Carl Ruby and Allen B. Kramer of Detroit. An advertisement in the 1960s says the owner was the Knott Hotels Corporation, and the manager J. J. Hyland. At some point the Pizzagalli Construction Company owned it.

Judge Robert Larrow, active in Burlington’s Democratic Party, remembered visits by John and Robert Kennedy. Robert is said to have campaigned for his brother in 1960 from the second-floor balcony. Vice President Lyndon Johnson stayed at the hotel in October 1963. One month to the day before he would unexpectedly become president, he spoke at a $25-a-plate political fundraiser in the hotel. Chef Niels Madsen remembered that special arrangements were made to find a long bed for the tall Texan.

The old hotel’s polish was fading. Rosaire J. Longe, city assessor, recalls attending a function on the roof, in the late 1960s, when the paint on the wall was weathered. But “it was still fun, like being on top of the world,” he said.  Still, in 1970 the Hotel Vermont went out of business.

New owners remodeled the building, converting the rooms into 85 (some reports say 74) efficiency apartments, which they rented inexpensively, and 10 business units. They renamed the building Park Centre Apartments.  Maintenance languished. A bar called the Windsor Lounge opened, catering to those down on their luck. The neighbors developed a negative attitude toward the Park Centre, which was becoming seedy. “I‘d like to see somebody keep it up. It used to be a beautiful place,” Madsen lamented from his retirement in South Burlington.

By September 1981 the owner owed the city more than $39,000 in delinquent tax and water payments. The Burlington Savings Bank began foreclosure proceedings. In January 1982 the city cited the Park Centre for health, safety, and fire code violations. Despite the fire danger, twenty apartments were occupied by tenants who chose not to move out. In October 1982 the Park Centre went up for auction, but no buyer was willing to pay enough to satisfy all the creditors.